I was asked to make a blog post on our short, Tarang that a few months ago won “Best Experimental Project” at the Los Angeles 3D Film Festival. I thought that I’d give a bit of break down on a few of the inspirations for the piece and talk about a few things that many people don’t realize about the pieces construction.

A project I and a group of fellow Viz Lab students, Shyam  Kannapurakkaran and Ganesh Rao, created a year ago, Tarang is multi-point of view telling of an Odissi Dance, performed by Aparupa Chatterjee. I say multi-point of view because of the technique used to create the video inspired by the “joiners” of David Hockney. 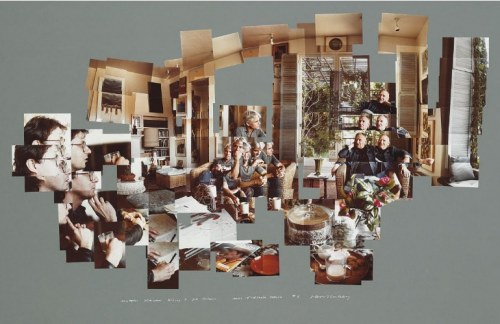 A Joiner from David Hockney

Tarang is not only one dance, but several edited together to create a singular coherent experience. Because it was shot in 3D, we filmed the dance six times and each shot corresponded to how depth cues were created. Two shots for close ups for theater space, two for medium shots for flat, and two for wide shots for screen space. When watching Tarang, you’re watching several different dances, shot at different times with different movements in each.

Just like Hockney’s “joiners,” which were meant to work beyond the normal range of a photograph to show an event playing out in time and space, Tarang does the same in a slightly different way. It would be easy to say that the added depth creates an illusion of increased space, though that shouldn’t be forgotten, but what I find more intriguing about it is since each of the shots were filmed several times, each dance was unique. Tarang, like the “joiner,” really plays with the idea of video by taking it beyond video’s normal conception of linear time as well.

Tarang’s editing process was also very unique, not only because it dealt with the idea of non-linear time but because the actual piece was only realized after we shot the dance. When I sat down to edit this footage, I only had the inkling of creating a “joiner” like Hockney from a dance style I had only recently learned about filled with traditions and a rich history that I frankly knew nothing about. What I knew about Odissi is that each dance tells a story and that Apurapa used her skill to tell it through a series of complex movements and gestures based on Hindu mythology; what those gestures were, I had no idea.

My ignorance was with purpose; however, I wanted the movements and the music of the piece, created by Ganesh, to guide me and create a story totally out of however those spoke to me. That being said, not only was each dance unique but I further complicated everything by combining them to be viewed simultaneously to tell a story only vaguely guided by the story created by the dancer’s original dance. During the edit I was able to focus on a particular movement or gesture and further amplify its meaning. The meaning had become different but it, in my opinion, was made stronger by the repeating of the elements and the added dimension.

Tarang was designed for a larger screen in order to really see the kind of intense quality of these multi-layered images flowing before you. The title of the film comes from the Hindi word, wave, as the quality of the dance does create an illusion of the elements as they flow around and through everything.

Create from Blank Page Start with a Template